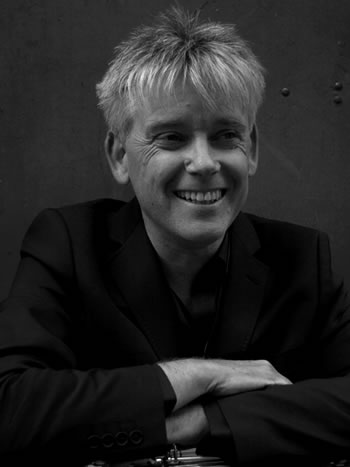 ...not so far from the restrained mode of John Surman's recent ECM solos.
The Wire, February 2011

Chris studied saxophone at the Guildhall School of Music & Drama with Sir Thomas Beecham’s favourite bass clarinettist, Stephen Trier, from 1983-86. In his first year at college he joined the
Delta Saxophone Quartet which celebrates its 40th anniversary of creative music making in 2023-24.

He is a respected orchestral saxophonist and has toured the UK & overseas with the RPO, RSC, WNO, ROH, Ulster Orchestra, BSO, BBCSO, Britten Sinfonia & CBSO. Chris has performed at the BBC Proms including the last night, on numerous occasions with BBCSO, Britten Sinfonia, London Sinfonietta & The Mike Westbrook Orchestra. Other highlights include a concert at the Great Hall Salzburg Mozarteum with the CBSO under the baton of Sir Simon Rattle, a performance in the Philharmonie Berlin with the BBCSO (John Adams - Nixon in China) and onstage with the Michael Nyman Band at the refurbished Teatro La Fenice in Venice.

Chris also enjoys being involved in more popular side of the music profession. He was part of the Dame Shirley Bassey Orchestra in the early 2000’s, memorable concerts include those in Istanbul, Beirut, Monaco, The Roundhouse London - BBC Electric Proms and an extraordinary performance in Giza where the backdrop included an incredible sunset accompanied by the iconic Egyptian monuments including the three Pyramids & The great Sphinx. He has performed at the Barbican, RAH, RFH, Saddlers Wells, ROH, Birmingham Symphony Hall, The Sage, Glasgow Royal Concert Hall,The National Concert Hall in Cardiff, Bridgewater Hall, and the National Concert Hall in Dublin.

In 2019 Chris was part of the orchestra for the European leg of Hugh Jackman’s ‘The Greatest Showman’, world tour. He has been involved in albums recorded by Jools Holland, Mike Flowers, Elvis Costello, Mike Westbrook, Delta Saxophone Quartet, Dame Shirley Bassey, & Lorna Luft (daughter of Judy Garland). Chris is one of the saxophone members of the London Concert Orchestra which has provided the musicians for the Strictly Come Dancing duo Anton & Erin for their previous ten national UK tours.

Chris has worked with Susie Hodder-Williams since 2005 creating landscape/time descriptive music which has resulted in 7 album releases to date (six on the FMR label). His latest collaborative EP release was in March 2021 titled, Hemispheres which has already received radio play on the BBCR5, RTÉ, DevonStream and stations from Tokyo to Boston via Perth in Australia. Chris has worked in London’s West End on many musicals including Cats, Chicago, Me & My Girl, Les Miserables, Matilda, West Side Story, 42nd Street, Motown, Sweet Charity & Guys & Dolls. He enjoys working with the Devon based TV/Composer Paul Honey so you might hear his bass clarinet & soprano saxophone on CBeebies or in dispatches on the antiques roadshow!