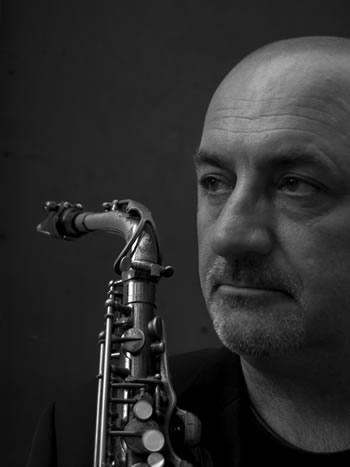 Peter Whyman is a highly regarded international soloist and has, as a consequence, performed at most of the world's greatest concert halls. These include: the Sydney Opera House, Carnegie Hall, Royal Albert Hall, Les Halles, Hong Kong Cultural Centre, Köln Philharmonie, Lincoln Centre and the Royal Festival Hall.

He is widely regarded as one of the foremost saxophonists of his generation.

Peter studied at the Guildhall School of Music and Drama with Yona Etlinger, Anthony Pay and Tony Coe.  After graduating, he began working with Mike Westbrook OBE, an association that has resulted in 20 albums and continues to this day.

Peter is also a member of Between the Notes, Steve Martland Band, Delta Saxophone Quartet, The Barry Adamson Experience, and Huw Warren Octet, among many others.

His musical world is extremely eclectic, and while he has played with the Philharmonia the Royal Opera House Orchestra, Birmingham Contemporary Music Group, Lontano, Music Projects London, BBC Concert Orchestra, London Sinfonietta, Terry Riley, Dawn Upshaw and as the clarinet soloist under Leonard Bernstein in his Prelude, Fugue and Riffs, he has also recorded with the likes of Pulp, Spiritualised, Elvis Costello, Maximo Park, Damon Albarn, Everything But The Girl, Magazine and Radiohead.  On the other hand, he has also played at all the major jazz festivals in Europe.

When Whyman switched to soprano, his avoidance of post-Coltrane cliché, and the deft intelligence of his lines didn’t flag.  A fine virtuoso… The level of technical certainty was awesome.
John Fordham, Guardian

...dominated by the remarkable playing of Peter Whyman.  A sophisticated and highly accomplished young jazz musician.
The Observer

The real revelation is the playing of Peter Whyman...extraordinarily confident, already something of a virtuoso.
Charles Fox, New Statesman

The instrumental playing of Peter Whyman is thrilling.
The Times